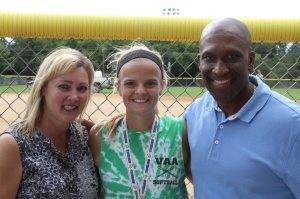 Last Sunday, our family loaded up the car with the essential cooler, sweatshirt and lawn chairs and headed to the ball diamond for the annual “end of the season” tournament. As best as we could recall, this was our family’s 16th year participating. Some years it went well, and other years we were okay with losing our two games and ending the season.

This year with the sun shining and no forecast for rain, the tone was set for a good day. Entering the tournament in first place was a bonus, but none of that mattered now. What mattered now was playing each game to the best of our ability. The girls were ready and the parents, grandparents, siblings and friends were gathered on the sidelines prepared to do their part. It wasn’t long before the first pitch was thrown, the first out called, and the first run in the books. We were off and running.

Four games, and seven hours later, the last strike was called, the last run scored, and the last inning complete. The day was intense, the games close, the girls tired, the play top notch, and the fans engaged. Soon the trophies were awarded, hugs exchanged, chairs packed up, and we were on our way to our cars. Another season of community softball was complete.

Gratitude – It was a day of gratitude because of the overall experience and people involved. Seeing players hug other players and coaches was fulfilling. I found myself needing to thank other fans for supporting the kids and team. The grandparents who cheered for “all the kids” by name! You wanted the best for each player, and that was contagious. And to the siblings, young and old, who weren’t too cool, or busy, to bring their own lawn chair and join the crowd. Thanks. Even when the games weren’t close or were boring, your presence made a statement. So many people shared their Monday and Wednesday nights, and pieces of their life. How can I not be grateful?

Disbelief – It was a day of disbelief because it was the end. Once the last out was made and the game called, the reality began to set in. As the awards were handed out and the pictures taken, the lump in my throat began to form. This was the last season of playing community softball. Too many hours to count, too many bad calls to remember, too many coaches to recognize, too many positions played, and too many teammates to thank. My mind suddenly flashed back to both girls playing T-ball as Kindergartners and then I looked up and saw them grown – 18 and 21. Where has the time gone?

So many ministry leaders want to bash young people’s participation in sports – at least the excess of it. I’d like to offer another look. This week I’m resting in the richness it can also provide. Today I’m grieving and celebrating its place in our lives. More than the skills gained, I’m most moved by the number of adults who have accompanied my daughters, cared about their lives, and simply “been there” for them. And in particular, I’m thankful for the coaches. The coaches who saw my kids as more than “pitchers” or “second basemen”; coaches who challenged, and gave space for error; coaches who encouraged, and listened, and coaches who made mistakes, and let others do the same. Thank you! Lisa, Tony, Julie, Andrea, Brad, Eric, Jeff…etc….this one is for you!

Living in the suburbs, I’m often unsure of where I’ll find community. And while this may not be a stated goal of VAA (Valley Athletic Association), I’m grateful for its place in our life, because sitting on the third base sideline has been one place I found community.